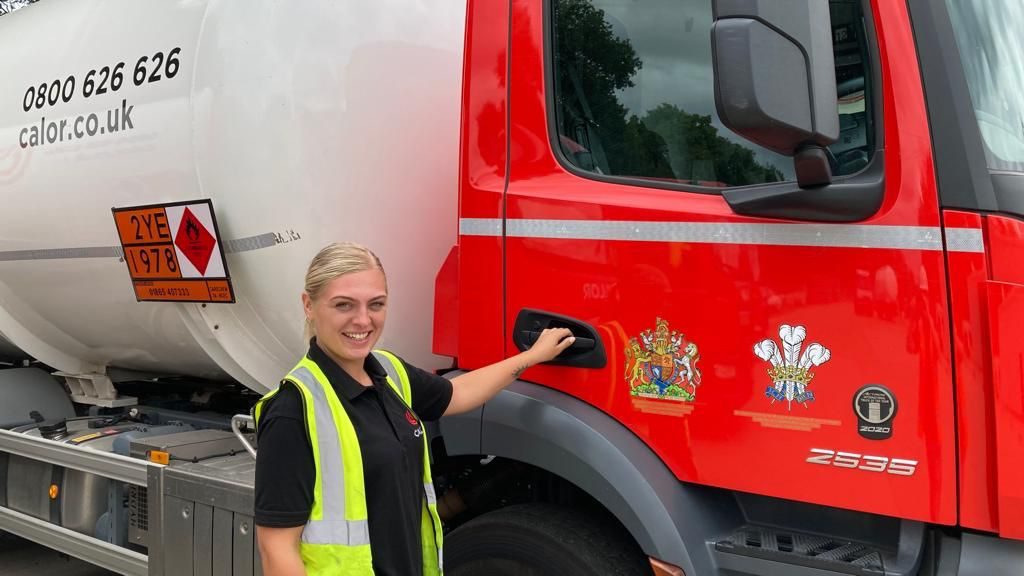 As one of only a handful of women who apply to TRS to be an LGV Driving apprentice, Rhea Osborn has hit the ground running in her new role with Calor Gas. Once she qualifies, the ex-supermarket employee will be taking the wheel representing her family’s third generation of truck drivers.

Since starting in the role, Rhea has demonstrated the passion behind her childhood ambition to learn to drive big trucks. The dedication and work ethic of the 25-year-old has caught the eye of tutors and directors here at TRS.

Rhea started her new role in the spring of 2022 and is making rapid progress through her qualifications. Alongside this, she is speedily acquiring the practical and specialist skills Calor requires her to progress to getting behind the wheel of their delivery vehicles.

Rhea’s day starts at 5 am when she leaves home. She is the only female among about 20 delivery personnel working shift patterns at her depot. But she confirms her colleagues treat her the same as everyone else. On a typical workday, Rhea learns about loading and unloading, undertaking vehicle checks, and following good safety practices. She also accompanies drivers on deliveries.

Rhea talks about her apprenticeship training, most of which takes place at Calor’s depot in Cranbrook, in Kent:

‘At the depot, we handle small gas tankers and the lorries delivering cylinder bottles.  I took the opportunity to gain experience in both types of vehicles. I’ve already completed my ADR, the licence to carry a hazardous substance. By the end of the year, I could be behind the wheel making deliveries.”

As well as her ADR, Rhea has already completed the first four modules of her apprenticeship. The most recent of these was learning how to prepare the vehicle for driving. She has just five more modules to complete. She enjoys her job much more than her previous roles in a letting agency, a cafe and as a cleaner. When the apprenticeship came up, it was an opportunity to fulfil a lifelong ambition. Rhea says:

‘My dad, grandad and uncle are all LGV drivers! As a child, I was always excited to get in my dad’s cab. I loved being out on the road and have had an ambition to drive a truck since then. The apprenticeship is a gateway to me achieving a childhood dream and building a career with Calor.’

Qualifying as an LGV Driver

Rhea is making rapid progress towards qualifying as an LGV driver. Alongside her apprenticeship modules, she has passed her LGV driving theory test and is completing the rigorous health and safety training Calor requires.

The next steps for Rhea are to complete the remaining apprenticeship modules.  And in October, she will spend a week receiving intensive driver training and then take the practical driving tests. Rhea is hoping to qualify and gain her apprenticeship in just 12 months. She told us:

“I want to gain my full apprenticeship no later than April 2023. As a female in a male-dominated industry, many people can underestimate you. But I am capable of doing the job and gaining the qualifications. I never dreamt that somebody else would pay for me to qualify. But that’s the case thanks to the apprenticeship programme.”

Directors and staff at TRS have noted how determined Rhea is to complete her training and apprenticeship in the shortest time possible. Her can-do attitude and conscientious approach make this seem all the more likely.  Rhea’s trainer Shona McGregor-Kendall says:

‘Rhea is a great role model, not just to other women but also to other apprentices. She is determined to let nothing stand in her way. We look forward to her qualifying and joining the many other previous TRS LGV apprentices who are now helping to keep the country moving.’

For firms looking to grow their workforce, apprenticeships offer a gateway to recruiting and developing highly qualified and loyal employees like Rhea. For more information, contact TRS director, Kevin Birch on 07788 120 608.

Warehousing Apprenticeships: A Solution to the Brexodus Drain

B&M sign up with TRS to train LGV drivers