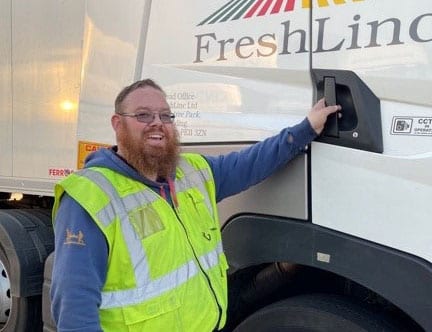 When Spalding logistics company FreshLinc embarked on a recent program of apprenticeships delivered by TRS Training, their new employee George Chipperfield was earmarked as an ideal candidate. Having already overcome a number of challenges in his life, George wasn’t convinced he’d have the mettle for it. However, with the support of his employer and TRS, it wasn’t long before the full extent of George’s abilities began to emerge.

In 2019, George enrolled on the Large Goods Vehicle (LGV) apprenticeship. Then aged 35, he had been dealing with undiagnosed dyslexia and its associated learning issues since his school days and as a result had always suffered with a severe lack of self-confidence.

Jonathan Osborne, apprenticeship training assessor at TRS, supported George from the outset. He is proud to have seen the change in George as the apprenticeship progressed. Jonathan comments:

“When we first met George, it was clear that he was working hard to overcome a number of difficulties. None of them had ever been formally diagnosed, so we arranged an assessment. The results enabled us to pinpoint his exact needs, and get him tailored help. George had little faith that he’d finish the course, but following many conversations, we were able to mould the training specifically to his own personality and requirements.”

FreshLinc specialises in the total supply chain management of temperature-controlled products across the UK and they were keen to tap into George’s existing knowledge of mechanics and code reading. Through the apprenticeship, George went on to develop a fully-rounded knowledge of the industry, including the complex operation and maintenance of LGVs.

George’s confidence grew to such an extent that he was soon inspired to pass on the benefit of his experience by becoming an apprenticeship mentor. As a mentor he plays a critical role in supporting other apprentices through their own experience of the course and imparting his knowledge of FreshLinc’s company processes and expected behaviours.

George completed his own apprenticeship in 2020 with a Class 2 LGV licence in the bag. With ongoing support from his employer, he has gone on to achieve his Class 1 whilst continuing his role as apprenticeship mentor.

George has proved himself to be one of FreshLinc’s most successful and inspirational members of staff and is rightfully proud of his achievements. He comments:

“I started my apprenticeship at the age of 35 and was so grateful that TRS took a chance on me. The one-to-one support I received throughout the course was second to none. It has enabled me to improve my life in more ways than one. Following my diagnosis for severe dyslexia, I came out the other side with everything I had set out to accomplish; not only have I achieved my HGV licence, but I also have qualifications in maths and English. Thanks to the support I received and new friendships I have built, I now have coping mechanisms for when my dyslexia causes me to become to agitated or confused. I have the life skills I need for my working environment and continuous job opportunities for life.”

He continues: “I really enjoy mentoring Amanda; another LGV apprentice who had no previous knowledge of the haulage industry. I’ve been teaching her what I know and guiding her so she can prepare for her own tests. I want to pass on my knowledge and help a fellow apprentice through a time when there is so much to learn that it can feel like the weight of the world is on your shoulders. It’s really useful to have someone there to let you know how well you’re doing and to encourage you to never give up. Sometimes it means more when it comes from someone who has already been through it.”

Andy Tubb is the group compliance manager with FreshLinc. Part of his role is to recruit, manage and mentor the apprentices all the way through the program, and he explains how George’s success has been a genuine team effort:

“When he arrived at FreshLinc, George was hugely nervous and he seriously doubted his own abilities. With the fantastic support of TRS and guidance from our own in-house training team, George eventually developed his confidence to become a fully qualified LGV driver.

“George also had a passion for helping others and he was keen to offer his knowledge to fellow apprentices going through the same experience. He has done an amazing job mentoring Amanda. Apprenticeships are more than just training: coaching, mentoring and support are essential elements of the process. George has thrived on all of these experiences.”

Warehousing Apprenticeships: A Solution to the Brexodus Drain

Any cookies that may not be particularly necessary for the website to function and is used specifically to collect user personal data via analytics, ads, other embedded contents are termed as non-necessary cookies. It is mandatory to procure user consent prior to running these cookies on your website.